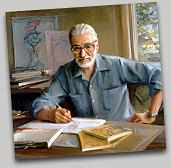 Was he already dreaming up “The Cat in the Hat” or “Green Eggs and Ham”, when he became a household name?

Theodore Seuss Geisel, best known as Dr Seuss, became best known as the author of some of the funniest and most amazing children's books ever published. His stories are full of tongue twisters and some very innovative vocabulary.

But did you know that his first manuscript titled “And to Think That I Saw it on Mulberry Street (1937)”, was rejected by twenty-eight publishers before Random House/Vanguard Press chose to publish it? Incidentally, the former President of Random House/Vanguard Press, Bennett Cerf once remarked, “I’ve published any number of great writers, from William Faulkner to John O’Hara, but there’s only one genius on my authors list. His name is Ted Geisel.” Persistence is the key…

“Nothing in the world will take the place of persistence. Talent will not; nothing is more common than the unsuccessful person with talent. Genius will not; unrewarded genius is almost a proverb. Education will not; the world is full of educated derelicts. Persistence and determination alone are omnipotent. The slogan “press on” has solved and always will solve the problems of the human race." - Calvin Coolidge