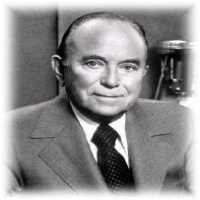 Raymond Albert Kroc, not a household name, but an important one, nonetheless. Everyone, however, knows the name McDonalds and what it stands for.  Kroc’s youth was spent refining his salesmanship skills, first allowing him to be an ambulance driver for the Red Cross (though underage), then selling a variety of goods, including paper cups. This is where he met Earl Prince. Prince had invented the five-spindle multi-mixer. Impressed with this machine, Kroc convinced Prince to give him exclusive marketing rights, thus allowing him to successfully sell it all over the country for the next 15 years.

During his travels, he approached one of his biggest customers of the multi-mixer, the McDonald brothers, who owned a restaurant in California. After meeting with the brothers several times and discussing the possible expansion of their business, he finally determined that they were not interested in making any changes. His persistence paid off, however, when he was finally able to convince the brothers to make him their exclusive marketing agent. In 1954, at the age of 52, Ray Kroc opened his first McDonald’s drive-in in Des Plaines, Illinois. This was the beginning of the McDonald’s Corporation.

Suffering from diabetes, arthritis and having his gall bladder and thyroid gland removed, Kroc only increased his desire to succeed. In one of the greatest acts of salesmanship of all time, he purchased the McDonald’s Corporation from the brothers for a mere $2.7 million dollars, in 1961. He immediately started recruiting franchisees and saturated the American market. Then, turning his attention to overseas, he opened restaurants in more than 65 countries, tailoring each one to its cultural needs.

Turning the operation of McDonald’s corporation over to Fred Turner in 1968, Kroc devoted his attention to monitoring the businesses of the new franchisees. During his travels, Kroc would insist that his chauffer drive him to at least 6 franchises so he could pop in and do surprise check-ups. Ray Kroc would remain active in the business until he passed away at age 82, just ten months before the McDonald’s Corporation would sell its fifty billionth hamburger.