Video of the Week:

from Think and Grow Rich by Napoleon Hill

One of the most common  causes of failure is the habit of quitting when one is overtaken by temporary defeat.  Every person is guilty of this mistake at one time or another.

An uncle of R.U. Darby was caught by the “gold fever” in the gold-rush days, and went west to DIG AND GROW RICH.  He had never heard that more gold has been mined from the brains of men than has ever been taken from the earth.  He staked a claim and went to work with pick and shovel.  The going was hard, but his lust for gold was definite.

After weeks of labor, he was rewarded by the discovery of the shining ore.  He needed machinery to bring the ore to the surface.  Quietly, he covered up the mine, retraced his footsteps to his home in , told his relatives and a few neighbors of the “strike.”  They got together money for the needed machinery, had it shipped.  The uncle and Darby went back to work the mine.

The first car of ore was mined, and shipped to a smelter.  The returns proved they had one of the richest mines in !  A few more cars of that ore would clear the debts.  Then would come the big killing in profits.

Down went the drills!  Up went the hopes of Darby and Uncle!  Then something happened!  The vein of gold ore disappeared!  They had come to the end of the rainbow, and the pot of gold was no longer there!  They drilled on, desperately trying to pick up the vein again – all to no avail.

Finally, they decided to QUIT.

They sold the machinery to a junk man for a few hundred dollars, and took the train back home.  Some “junk” men are dumb, but not this one!  He called in a mining engineer to look at the mine and do a little calculating.  The engineer advised that the project had failed, because the owners were not familiar with “fault lines.”  His calculations showed that the vein would be found JUST THREE FEET FROM WHERE THE DARBYS HAD STOPPED DRILLING!  That is exactly where it was found!

The “Junk” man took millions of dollars in ore from the mine, because he knew enough to seek expert counsel before giving up.

Most of the money which went into the machinery was procured through the efforts of R.U. Darby, who was then a very young man.  The money came from his relatives and neighbors, because of their faith in him.  He paid back every dollar of it, although he was years in doing so.

Long afterward, Mr. Darby recouped his loss many times over, when he made the discovery that DESIRE can be transmuted into gold.  The discovery came after he went into the business of selling life insurance.

Darby is one of a small group of fewer than fifty men who sell more than a million dollars in life insurance annually.  He owes his “stickability” to the lesson he learned from his “quitability” in the gold mining business.

Before success comes in any man’s life, he is sure to meet with much temporary defeat, and, perhaps, some failure.  When defeat overtakes a man, the easiest and most logical thing to do is to QUIT.  That is exactly what the majority of men do.

More than five hundred of the most successful men this country had ever known, told the author their greatest success came just one step beyond the point at which defeat had overtaken them.  Failure is a trickster with a keen sense of irony and cunning.  It takes great delight in tripping one when success is almost within reach.

Extracted from the bestselling book, "Think and Grow Rich" by Napoleon Hill 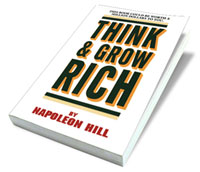 Think and Grow Rich by Napoleon Hill is probably the most widely read self-help book of all time.  It  has single-handedly influenced and motivated more individuals to wealth and success than any other material of its kind.  Download it and think and grow rich TODAY!  It's FREE!

5 Easy Steps to Total Self Improvement
If you want to really know where to begin and focus, we’ve included a list (in order) of what to do to become the best you.
Confidence
It can be learned, it can be built, and it can be mastered. And it is important and crucial to your success.
Courage
Fear can be absolutely immobilizing. Courage is the grease to get you moving when frozen with fear.
Walt Disney - Visionary
Bankrupt and fired for having "no creativity", Disney became a household name for kids and adults alike.
THOMAS EDISON – The Wizard of Menlo Park
More than a few blunders + 1000 failed attempts inventing the lightbulb = The most prominent inventor of our time.
Albert Einstein in a Nutshell
Einstein was not always known for his genius. His brilliance did not clearly surface until he failed many times.
Giving and Gratitude
When one feels gratitude on a regular basis they attract more of what they are feeling thankful for into their lives.
Ray Kroc– Over 50 Billion Hamburgers Sold!
From a humble salesman to pioneer of franchising and founder of the most successful fast-food franchise ever.
GOALS
Want to know the secret of successful goal setting? BEGIN! The rest is easy.
NEVER QUIT - EVER!
A run down (just a paragraph each) on some of the most famous individual's starts and finishes. Learn from some of the most successful and accomplished leaders of today who faced incredible challenges, unbelievable odds, and failure after failure.
NLP - The Science of Neuro-Linguistic Programming
NLP may be the quickest and easiest way to a better you. Why? Because you don’t have to think about it.
Obstacles -What Obstacles?
Look for the trees and you’ll hit a tree – every time. The Law of Attraction at its simplest. You get what you focus on – invariably. See obstacles, you get obstacles. See opportunity, you get opportunity. Focus on a great life and happiness and you’ll get . . . .
Persistence
This site is filled with amazing stories about people you know that failed and were rejected over and over again. By their sheer persistence they beat all odds and conquered seemingly insurmountable obstacles to go on to achieve what others thought was impossible.
Photographic Memory
Want photographic memory? The simplest and easiest way to have photographic memory. You can and will have photographic memory if you follow these simple instructions.
Positive Thinking
Positive thinking will positively help you do everything better! The power of positive thinking is at your fingertips . .
Positive Mental Attitude
Thoughts on maintaining a positive mental attitude.
Colonel Sanders - 11 Herbs and Spices
Cooking since he was 6, Col. Sanders did not open his 1st KFC until he was 65 years old, but had 600 franchises by age 75.
Building Self Esteem
Unlike your physical appearance, that you can’t do anything about (unless you’re rich or your uncle’s a plastic surgeon), you can change your self esteem.
Dr. Suess - Oh the Places You'll Go
Dr. Suess was rejected over 28 times for his first book . . .
Think and Grow Rich
Three Feet from Gold extracted from the inspirational "Think and Grow Rich" book by Napoleon Hill.  Think and Grow Rich today.